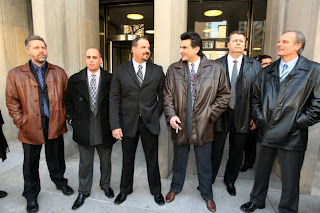 I appreciate everyone who keeps sending in relevant links. There’s no way I could find all this stuff on my own. This is another example of how a Regional Police force isn’t a magic wand solution to police corruption.

Rudge fell under suspicion when the NRP intelligence branch learned the Hells Angels possessed confidential police documents about the rival Outlaws Motorcycle Club as well as their plans to reopen a St. Catharines chapter.

Rudge was charged following a provincewide raid in 2006. The officer denied allegations against him at his first trial, claiming a third party stole the documents from the detachment. Rudge was acquitted in 2010 but the Court of Appeal ordered the case be retried.

Between 2005 to 2008, Richardson served as a staff sergeant at the Port Colborne detachment. He testified that the police building is secured by a entry system requiring an access number.

During each shift there are a minimum number of officers and a staff sergeant on duty, and that during the night shift the Port Colborne detachment sees “a steady flow” of officers in and out while performing their duties, he said.

Lisa Isherwood of the Niagara Regional Police testified she worked with Rudge in the summer of 2004 to 2005 performing bylaw compliance checks in bars in Port Colborne, and witnessed Rudge communicating with several individuals associated with the Hells Angels. Constable Frank Dean Rudge was also charged with assaulting a woman in an unrealted case.

Hells Angel Ian Grant was also caught with confidential police documents in his home. Ken Houston was caught with a member of the Winnipeg Hells Angels. Edmonton PD were accused of leaking information to the Hells Angels as well.

Freddy was mentioning about the Toronto Team 3. A drug squad accused of years of corruption which included ripping off drug dealers. Turns out the task force was a scam and everyone was acquitted. Yet standing outside the courthouse they look guilty as f*ck.