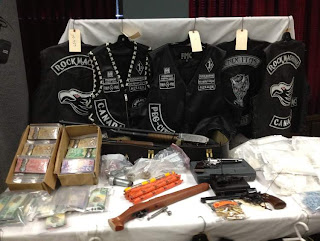 RCMP claim the entire chapter of the Manitoba Rock Machine motorcycle gang was swept up into police custody in an RCMP raid Wednesday. Police and RCMP seized 13 pounds of cocaine, 1,800 tablets of Benzylpiperazine about eight pounds of marijuana, firearms, ammunition, two pipe bombs and eight other commercial explosive devices

In their excitement they claim that the Rock Machine Motorcycle Club has been wiped off the Winnipeg map and that "today is a very good day for public safety in the province of Manitoba." I’m less eager to agree. That is a small bust compared to Hells Angels standards. Wiping out the Hells Angels rivals does not make the streets safer for anyone. It just makes the Hells Angels more ruthless in their monopoly as they continue to murder any drug dealing rival and torture drug addicts for drug debts.

It is a step forward, but unless it is followed up with an increased resolve against the Hells Angels, it will result in three steps back. 6 kilos of cocaine is nothing compared to the 2 and a half tons seized from the Hells Angels on the Western Wind. What this bust does show is that the Rock Machine has indeed returned to become just another drug dealing gang. Please note that the RM support club is the Vendetta not LHS. LHS was a Hells Angels support club until they betrayed them and killed one of their own for the Ontario village idiots.

When you loot at the police photo, there’s nothing there that I support. Guns, explosives and pot to fund Cocaine and BZP the fake ecstasy that people die from. It’s just a perpetuation of greed. I will say that I like the RM logo better than the HA logo. An eagles head is way better than a helmeted skull with devil horns and feathers. Yet both roads lead to the same place: misery and violence driven by greed. That has nothing to do with riding motorcycles and living the dream.

Although the police claim the entire manitoba chapter has been wiped off the map, only 11 arrests have been made. 4 of them RM members. Joseph Strachan is one of them. He's charged with cocaine trafficking, proceeds of crime and participating in a criminal org. Does that mean he gets house arrest like CJ Barrowby did when caught trafficking cocaine for the Hells Angels in Surrey? Strachan was unable to make his first appearance due to being taken to hospital following his arrest Wednesday. A paid civilian agent was used to take down the crime ring. Sounds like all Strachan did was go for a car ride with the police agent. Anybody know what 18 13 stands for? Evidently the RM has the Hells Hounds as well as the Vendetta.