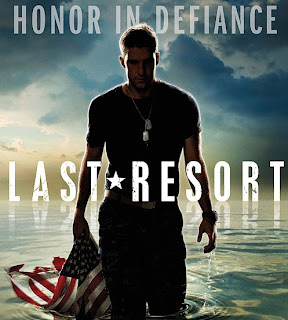 I don’t know if anyone else has been following the Last Resort TV series but I have. It’s been pretty dramatic. One of those shows you have to sit down and watch as opposed to multi task while it’s on in the back ground. The series theme is honor in defiance.

It all started off when a US nuclear sub was given an authorization to fire on Pakistan. Only the order didn’t come through the regular channels it came through a back up channel that would only be used if Washington had been knocked out in a time of war.

Right before launching the missiles both commanders at the key wondered why the order came through the back up channel. They turned on their surveillance and everything was normal at Washington. Something wasn’t right. They broke radio silence and called the president for a confirmation. That’s when Uncle Sam fired on their own sub. Who in turn blamed Pakistan and launched an attack against them anyways.

The whole point was the initial attack was an act of aggression they were using to justify an invasion. So here comes the dilemma: is it a soldier’s duty to simply do as they are told or does a soldier have a moral conscience in defending the free world?

Many would argue the former. A solder is meant to obey all orders and not think about them. Does that include falsifying evidence? Does that include false flag attacks? I think not and I’m not the only one. The series went to some pretty dramatic extremes where the good guys pushed the envelope in defending what they felt was right which in turn created division and confusion among the troops. It became unclear who the real traitors really were.

Well the series came to a dramatic end yesterday and I’m disappointed it’s over. Recognizing the thought was a good one regardless of how short it was. The end does not justify the means in preserving and upholding the constitution. When the good guys do bad things they aren’t the good guys any more. We all have been given a brain and a conscience for a reason.

Posted by Dennis Watson at 3:06 AM