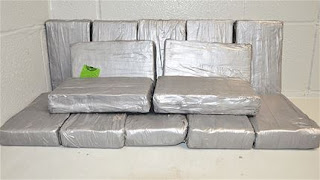 A man and woman from Moncton are facing drug smuggling charges in Texas after being arrested at the U.S.-Mexico border with just under 16 kilos of cocaine. Anthony William Knockwood, 41, and Heather Patricia Keirstead, 25, made a brief court appearance in Brownsville on Friday, but have not yet entered any pleas.

The pair were stopped at the Veterans' International Bridge in Brownsville on Jan. 21, driving a beige 1997 Endeavor recreational vehicle. They were selected for a secondary inspection where an x-ray showed 14 packages of cocaine hidden under the fiberglass shower and in the walls. X-raying an RV. Bad luck.

Mounties in Masset, B.C., have busted an alleged drug trafficking ring they say was operated by four members of the same family involving cocaine and crack. Masset is a village in Haida Gwaii (formerly the Queen Charlotte Islands).

Earlier this month RCMP in Iqaluit arrested four adults in connection with a drug investigation. More than a kilo of marijuana, some cocaine, some ecstasy pills and some Canadian currency were seized as a result.