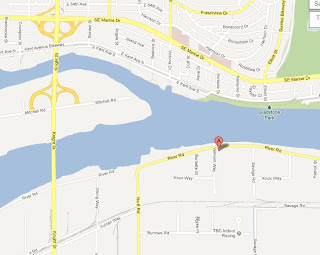 CTV is reporting that four people have been hospitalized with unconfirmed injuries after a shooting at a Richmond, B.C. banquet hall. Witnesses say a lone gunman opened fire just before 9 p.m. at the Riverside Banquet Hall on River Road, sending a crowd of people running for the exits.

The Vancouver Sun is reporting that it was at the Riverside Banquet Hall located at 14500 River Road. It is the same banquet hall where gangster Kuljit (Kelly) Buttar was gunned down on Dec. 22, 2001. That was back when all the old leaders of the Independent Soldiers were killed off and the IS became a puppet club for the Hells Angels. We remember the picture of Randy Naicker with Larry Amero. The IS leaders who were executed didn't worship Larry like Randy did.