If you were having Sushi or Starbucks in Vancouver today and saw a Falun Dafa marching band go by and you were wondering what it was all about, wait 'till I tell ye. The Falun gong or Falun Dafa as they call themselves are Buddhists that mediate and strive to cultivate traditional Chinese virtues. They practice healthy living and claim the world needs more morality and benevolence. You can't go wrong with that. Their motto is Truthfulness, Benevolence, Forbearance. They also practice a meditation in motion similar to Tai Chi. They are very kind and polite people.

Tragically Communist China doesn't see them as such. This is the 19th anniversary of the Communist party's persecution of the Falun gong in China. That's when they started rounding them up and throwing them in jail for their beliefs. To rationalize breaking their own laws, the Communist party launched a defamation campaign against the Falun Dafa claiming they are crazy and constitute a cult. Nothing could be further from the truth.

I first met the Falun gong on Canada Day 2016 at a protest outside the Chinese Consulate in Vancouver. I had heard the city of Vancouver successfully obtained a court order demanding they take down their protest signs outside the Chinese consulate and I was there with my drum to make sure everyone knew they still had a Charter right to stand there holding signs. The court order just said they had to take down the signs that were left up over night.

Here's the deal, not only are Falun gong members put in prison and tortured for their religious beliefs, they are executed to order for organ harvesting. The Communist government murders them to order and sells their organs. It is big business. Anastasia Lin, Miss Vancouver who went on to represent Canada in the Miss Universe pageant spoke out about it and appeared in a movie about the atrocity called the Bleeding Edge which is now on Netflix. As a result, the Communist governement banned her from participating in the Miss Universe competition in China.

Ethan Gutmann has documented the Chinese governments practice of organ harvesting from living political prisoners. The International Coalition to End Transplant Abuse in China are a group of credible professionals devoted to making the world aware of this evil practice.

In March of this year a bag with 27 pairs of severed human hands washed up on shore near the border between China and Russia down stream from a Chinese organ harvesting hospital. Local media reported that medical bandages and plastic shoe covers, usually found in a hospital, were discovered next to the bag of hands. This atrocity is real and needs to be addressed.

On Thursday July 19th there will be a candlelight vigil 8:30 PM outside the Chinese consulate in Vancouver. It is a very somber yet peaceful event. Each person quietly sits with a candle and a picture of a person who was tortured and murdered in China for their beliefs.

It's nice to see the Falun gong in Vancouver have stepped up their game and now have a marching band. The rally today started at the Vancouver Art Gallery and marched through Vancouver to Chinatown. It was a positive event shedding light on a dark secret. The New Tang Dynasty covered the event. I was one of the speakers.

This is an album of pictures from today's march. 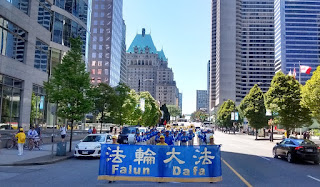 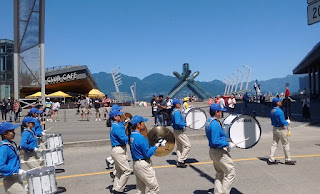 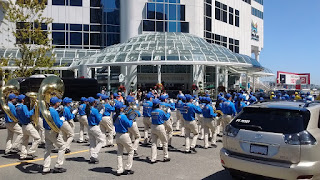 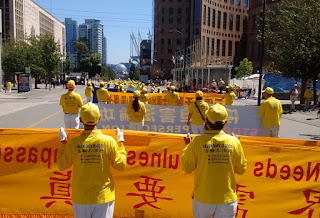 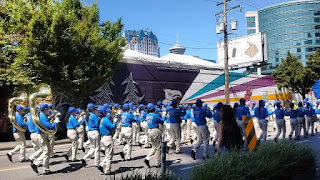 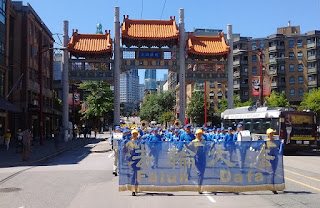 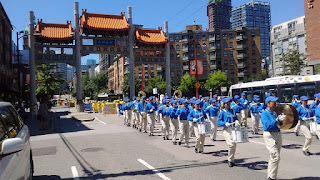 My father always used to say there are three kinds of people in the world. Those that participate in the parade, those that watch the parade and those that don't even know a parade is on.

After the rally and march I sat down and spoke with a couple of the Falun Dafa members who were both originally from Mainland China. I gave them each a copy of the Canadian Charter of Rights. One immediately pointed to Mobility rights and said we don't have mobility rights in China. On his phone he pulled up the text of the Chinese household registration system. In Taiwan, this system operates mostly as census tool. In China however, the hukou system is used to actively limit where a person is allowed to live. There is so much in life we take for granted.

I am told there is a new documentary out about labour camps in China called Letter from Masanjia. A lady from Oregon found an letter from a prisoner in China's notorious Masanjia labour camp within some Halloween decorations she bought at Kmart. That letter triggered a scandal exposing the labour camp to the rest of the world. It's another locally made film.

The movie Letter from Masanjia will be playing at the Vancity Theatre August 3-5 2018.