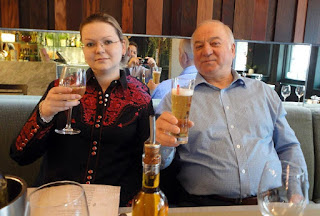 The fake news has become absurd. We've been through this before. Russia had no motive to use a nerve agent on a former KGB Agent in England. He was convicted of treason in a Russian prison. If they wanted to kill him they could have easily done so then. There was absolutely no motive to kill him years later. He had no new secrets to reveal. Now we hear news of two more victims in Salisbury that may have come in contact with left over poison from the previous attack. It just doesn't get any more ridiculous than that.

Russia is hosting the world cup and it has been a very successful event I might add. There is no motive for them to launch a nerve gas attack in England during the world cup. There is no motive there whatsoever. When Dr David Kelly blew the whistle on MI 6 for knowingly and intentionally sending false information to the media about Iraq's Weapons of Mass Destruction in Operation mass appeal, MI 6 murdered him on British soil. When the corporate media blindly prints every press release MI 6 sends them they lose what little credibility they had left.