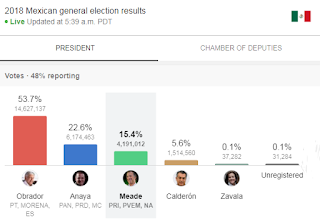 The New York Times is reporting that "Riding a wave of populist anger fueled by rampant corruption and violence, the leftist Andrés Manuel López Obrador was elected president of Mexico on Sunday, in a landslide victory that upended the nation’s political establishment and handed him a sweeping mandate to reshape the country.

"The core promises of Mr. López Obrador’s campaign — to end corruption, reduce violence and address Mexico’s endemic poverty — were immensely popular with voters, but they come with questions he and his new government may struggle to answer."

The Canadian Press is reporting that "Lopez Obrador vows that profound change is coming, but says individual and property rights will be guaranteed. He promises respect for the autonomy of the Bank of Mexico and says his government will maintain financial and fiscal discipline. He also says contracts obtained under energy reforms will be scrutinized for any corruption or illegality, but there will be no confiscation or expropriation of property."

It will be interesting to see the state of the privatization and nationalization of Mexico's oil. Nationalizing the oil will fund the social programs alright. The whole point of Operation Fast and Furious, aside from making the CIA money through drug trafficking, was to discredit the existing president so they could elect a new president that would privatize Mexico's oil. Perhaps now that decision will be reversed. Mexico First Campaign Could End Welcome for U.S. Oil Giants.