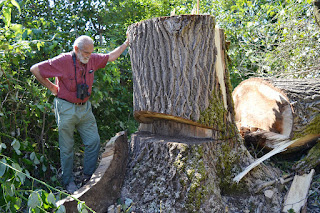 The Peacearch News is reporting that "The city is investigating after it had to remove a cottonwood tree in South Surrey that was home to one of the most noticeable eagle’s nests in Surrey." It was an active nest. A legacy of killing beavers, butterflies and baby peacocks just isn't good enough. Linda Hepner had to add killing baby eagles to her list of genocide before she leaves office. Without question, Surrey First has been Surrey's worst.

David Hancock from the Hancock Wildlife Foundation believes it was cut down on purpose and states that "the violation of the Wildlife Act under Section 34 has mitigation remedies not just of simple fines but offers up both Creative Fines Section 84 1-2 and Additional Fines Section 84.3 that allow recovery of any financial advantages gained though the violation of the Act."

On a side note, I attended a barbecue with my MLA Gary Begg yesterday in Surrey. I ran into Jinny Sims there. She said she knew me but I didn't recognize her. Turns out she is a NDP MLA for Surrey Panorama. She said she was in favor of the LRT put her hand up and walked away. Oh really? That means I do not support you. Is that your party position? Let's be clear.

She supports the LRT infrastructure nightmare along 104th avenue because she doesn't have to drive up and down that road every day like the rest of us who live in the area. I find it astounding and disheartening that an NDP MLA could even conceive of endorsing a road that goes right through an elementary school of marginalized kids. That is just plain wrong. This is what Laila Yuile referred to as the dark undertow within the NDP party. No different than the BC Liberals.

I met Imtiaz Popat there who is a candidate for the Surrey Community Alliance that has close ties to the NDP. An older man was giving him an earful about why he opposed the LRT along 104th and the road through Hawthorne Park. I jumped in and said that's because we live here. Imtiaz turned to me pointing to his ear and said he was listening. Since when does a politician listen? That's a novel thought. He did have a good idea though.

Imtiaz asked me if I had heard of the Interurban. At first I paused because I wasn't sure what he was referring to then said oh you mean that electric railway Vancouver used to have that was incredibly efficient but done away with by the oil companies? Tillers folly sang a song about that.

That's the one. Imtiaz said we should use those tracks which already exist. That's a thought. It would save a lot of money. Running LRT down 104th is just plain stupid and putting an elementary school of marginalized kids on a traffic island is just plain wrong.