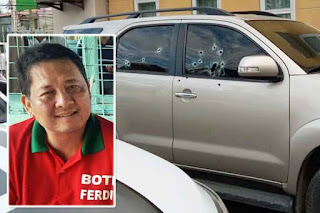 CNN is reporting that "A second town mayor in the Philippines has been shot and killed by an unknown assailant, a day after one was assassinated by a sniper in a brazen daylight attack. Mayor Ferdinand Bote of the town of General Tinio in Nueva Ecija province was gunned down by a motorcycle-riding suspect in nearby Cabanatuan City on Tuesday afternoon, police told CNN Philippines. Bote appears to have been the victim of a drive-by shooting, in which he was struck multiple times, while riding in his beige Toyota Fortuner, according to the police report. Bote was declared dead on arrival at MV Gallego hospital and an investigation has been launched."