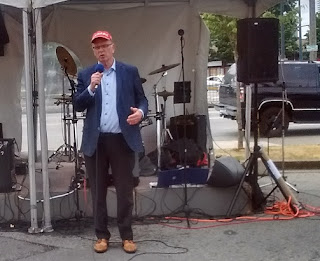 Today Bruce Ralston and Bruce Hayne spoke at the Whalley street festival. Whalley is indeed transforming. The changes to the Surrey Strip are astounding. Getting the homeless into modular housing and getting rid of the tents is a huge step forward for everyone. Surrey supports Gentrification. Adding zoning for rental housing will make the transformation complete.

Two years ago Tom Zytaruk from the Surrey Now reported that "Big plans afoot for Flamingo Hotel site as developer eyes creating Surrey's Yaletown." This is good news for everyone. We have already started to see the transformation. Getting rid of the Dell show lounge was a huge step forward. That place was a dive. Now Planet Fitness and a new grocery store under construction in a new strip mall has been a real upgrade.

Panchos's is a sh*t hole. So is the Byrd and the Flamingo hotel. Aside from being a Hells Angels drug dealing cesspool, the hotel was also the HQ for the Hells Angels exotic dance industry monopoly. Everything the HAs touch in Surrey turns to trash. If Randy Jones wants to sell Dank and legal pot feel free but his involvement in selling crack, crystal meth and fentanyl along with drug addicted prostitution, has to come to an end. Natural justice will not condone that kind of exploitation in Surrey any more. Getting rid of the Flamingo Hotel along with Pancho's and the Byrd is exactly what we all need. That is progress.

Invest in Surrey is a website devoted to progress. Last year they held a Invest in Surrey Launchpad. Aside from Linda Hepner, every single person in that group is a keeper.