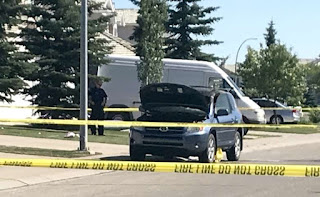 CBC is reporting that "Calgary police are investigating after a man's body was discovered in a vehicle found burning in the northeast community of Coral Springs. Emergency crews were called to the 600 block of Coral Springs Blvd. N.E. at about 1:45 p.m. on Saturday for reports of an SUV being engulfed in flames. Firefighters doused the blaze and a man's body was discovered inside the vehicle. A woman was then found nearby suffering undetermined injuries and was taken to Foothills hospital in serious condition. EMS said the woman was not injured by the fire."