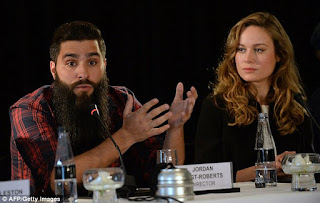 Someone recently sent me this article about Jordan Vogt-Roberts getting beat up in Vietnam for committing sexual harassment again. I don"t normally read GQ because I am a heterosexual but I will say there is definitely another side to that story.

In the GQ article Jordan Vogt-Roberts cries to the press and claims “Dude, this was not a fight. I was almost killed as were others. This was a f#©king assault by insane gangsters.” However, witnesses claim Jordan was sexually harassing one of the guy's girlfriends strutting around like he was god and could do anything he wanted to any woman he wanted regardless of who she was there with. Jordan turning this event into a press release is off the hook.

The Daily Beast is reporting that "Dana DeArmond, a porn star who has also appeared in several mainstream movies, tweeted Tuesday: 'I was harassed by both Tj Miller and the director Jordan Vogt-Roberts shooting for Comedy Central’s Mash Up. I’ve been saying Tj was an asshole for years. So there you go.' Though she did not elaborate on the alleged harassment she suffered from Miller, DeArmond offered some further details concerning Vogt-Roberts, who helmed the recent blockbuster film Kong: Skull Island as well as Mash Up, a 2011 half-hour comedy series hosted by Miller. “I wonder if Jordan Vogt-Roberts was a creep to anyone else.” she said.

Sometimes in life we have to face the natural consequences of our actions. That's Green Justice.

Posted by Dennis Watson at 2:31 AM