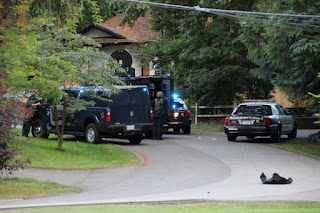 Global is reporting that "Abbotsford Police say a man is recovering in hospital after a shooting Sunday night. Officers responded to a home in the 2500 block of Birch Street after receiving a 9-1-1 hang-up call at around 6:15 p.m. BC Ambulance crews arrived to find a man in his early 20s suffering from an apparent gunshot wound. He remains in critical condition. An 18-year-old man has been arrested and remains in custody."