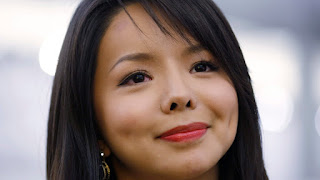 The Vancouver Sun is reporting that "Poised but defiant, Miss Canada will be vying for more than the winner's tiara when she competes in the annual Miss World pageant in Washington this weekend. Anastasia Lin wants to tell the world about the evil of organ-harvesting. Lin was due to compete at Miss World last year when it was hosted by China but was barred from entering the country due to her activism against persecution of Falun Gong, a meditation practice that she follows and that China's government has outlawed. U.K.-based Miss World is allowing her to compete again this year in the U.S."

Some U.S. media organizations say Miss World, which has Chinese corporate sponsorship, has prevented them from speaking to Lin. But she was allowed to speak to The Associated Press in an interview Wednesday in which she spoke forthrightly about her cause, although she sidestepped questions about whether she had faced restrictions. "Everybody is tied economically with China. China's soft power is so huge that no one really dares to speak up," said Lin, 26, at a hotel just outside Washington at the National Harbor in Oxon Hill, Maryland.

Lin, who was born in China and moved to Canada with her mother at age 13, has riled China's government with her public advocacy. She has alleged that tens of thousands of Falun Gong practitioners have been killed so their organs could be harvested and sold for transplants. She has spoken out at a U.S. congressional hearing, and since her exclusion from last year's pageant in China, she has attracted world media attention and given testimony before the British and European parliaments. She says the Miss World pageant, in which contestants each present a cause or platform, is another opportunity to speak out and give people hope.

"I'm talking about organs being taken from prisoners of conscience, meaning citizens who have not done anything wrong but to speak their mind and believe what they believe in. It's like innocent citizens being killed for their organs and their body parts sold for profits. It's happening and people need to pay attention to it," Lin said.

Here here! Here we have another beautiful woman with a brain and a heart. She has a social conscience and is displaying colossal courage to speak out about a repulsive injustice that most people are too busy to even notice. What a wonderful choice to represent Canada.

New Tang Dynasty TV is reporting that Everything seemed to be going well for Miss Canada, Anastasia Lin, during an interview Wednesday promoting the Miss World pageant - until she was asked whether she would be attending a screening of her new movie, which has reportedly enraged officials in her native China. Lin shot a glance at the four pageant officials assigned to listen in. "You can ask them," she told a Washington Post reporter.