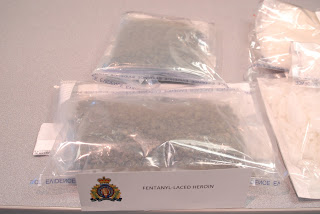 Kelowna Cap News is reporting that Kelowna RCMP seized 1.32 kilograms of suspected fentanyl-laced heroin and 2.1 kilograms of suspected methamphetamine. "Terry Weninger, 44, and Robert Colbon, 59, of West Kelowna, along with Darcy Lenko, 52, of Penticton, each appeared in court and have since been remanded into custody. Police say each have been formally charged with multiple counts of possession of a controlled substance for the purpose of trafficking.

Lance Wust, 42, of Kelowna has been charged with possession of a controlled substance. After his first appearance he was released by the courts on strict conditions. The remaining individuals arrested, a 52-year-old West Kelowna man, a 22-year-old Vernon man and an 18-year-old Kelowna woman were released from police custody. Each face potential charges and are expected to appear in court at a later date."

I know I'm not the sharpest knife in the drawer but that fentanyl-laced heroin looks green. You can kinda tell something is wrong with it. This is the RCMP press release.