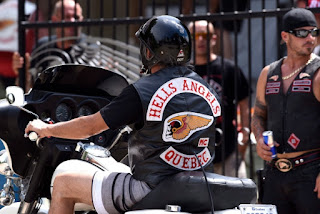 CBC is reporting that "Hells Angel Stéphane "Godasse" Gagné, 47, pleaded guilty to first-degree murder in Lavigne's death and was sentenced to life in prison, where he has now served more than 19 years. Gagné, who is eligible for parole in 2023, filed a motion last year to have his request for parole heard earlier. The motion was granted." Diane Lavigne was a widowed prison guard with two adult children. She was shot dead June of 1997 during the Quebec Biker War.

CBC also reported that as a child, Gagné was bullied, he said. In high school, he started dealing drugs. "No one bothered me. I learned that money brought respect," he said. He quit school, started stealing cars and kept on dealing. Soon, he affiliated himself with the Hells Angels in order to make sure he wouldn't get himself into trouble, dealing in the Hochelaga-Maisonneuve neighbourhood, which would become a hotbed of biker activity. Gagné said It was known in wartime that if you didn't kill, you don't move up. Yet there is nothing noble in killing a woman.

The day after the shooting, with news of the murder plastered all over television screens, Gagné's wife pronounced that whoever killed Lavigne must have been a repugnant person. Gagné, ashamed, slunk out and became a police informant. CBC claims in the summer of 1997, the biker war was in full swing. A fellow biker told him they had a job to do - a prison guard to kill. "I had two choices. Go to the police, or say no and be killed," he said.

This was Paul (Fon Fon) Fontaine's coacused. "On Sept. 8, 1997, Gagné and a different partner, Paul (Fon Fon) Fontaine, killed Rondeau and wounded Corriveau by firing several shots into the bus the guards were riding in as they headed to the Rivière des Prairies Detention Centre. The guards were about to pick up detainees who had court dates that day. Gagné was arrested on Dec. 5, 1997, and, after deciding to become a witness for the prosecution, he pleaded guilty, on March 25, 1998, to murdering Lavigne and the attempted murder of Corriveau."

When asked Why kill a prison guard instead of a member of the rival Rock Machine gang? He said "Prison guards can't kill you." This just keeps getting worse. Denying his parole isn't going to bring the woman he murdered back. It's just a no win situation. The driver of the motorcycle Stéphane was on when he shot Diane Lavigne, André (Toots) Tousignant, was murdered months after Lavigne was killed.

I think it's important to know that he was asked by the club to kill the woman. He didn't really have a choice. The job he did with Fon Fon was for Mom Boucher himself. He is the one that ordered the hit. Mom Boucher had a similar start as Stéphane. Boucher was a petty thief who robbed an old man with a shotgun. He got his patch after serving a prison sentence for armed rape. There is nothing there to admire.

Even in the top picture of the Quebec member on a run in Ontario, the guy has a full fairing and is wearing shorts. He looks like an idiot. People who ride motorcycles make fun of people who ride with shorts because your bare skin will turn to road kill on the dry pavement if you go down.

In contrast, I see there is a new season of the Musketeers on Netflix now. The French version of Arthur and the Knights of the Round Table or the chivalry aspired to in the movie Kingdom of Heaven with Orlando Bloom. Now that is noble. As William Wallace said in the movie Braveheart, lands and titles don't make a man noble. Neither does money from drugs.