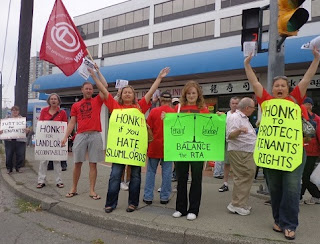 The plan is to tear town perfectly good rental townhomes and build high density apartments in their place. So in essence they are in fact displacing a whole lot of families to build new units so they can charge more money and make more profit without spending any money on new land. This is the cheapest way for the Metro Vancouver Housing Corporation to make more profit at the tax payers expense.

If they were genuine and really wanted a helpful solution without turning so many struggling families lives upside down, they would buy the vacant lot across the street and build new units. That would be a press conference worth listening to. Unfortunately they won't do that because displacement and densification is more profitable for the Slumlords and the Post Media Marketing Company is more than happy to endorse the fraud for the public. God help us. No one else will.

The bottom line is that we need to elect a new government in BC. No political party is perfect but I know the NDP wouldn't be doing this to us. The Christy Clark government is the same as the Gordon Campbell government. I cannot begin to list all the corruption they have been involved with from BC Rail to money laundering in Campbell Heights to cutting back police task forces as soon as organized crime was found. Bruce Ralston and Mike Farnworth are good stable leaders who care about people. The BC Liberals do not. History has recorded that.