The US Debt to China Fraud 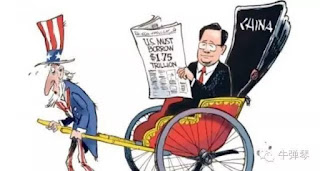 MSN News is reporting that the United States owes Communist China 1.5 trillion and that China is the largest foregin owner of US debt. The Business Insider is reporting that China's economy has grown so fast, that even as it today towers over most developed nations, and in fact as it finances their budget deficits, it's still receiving foreign aid from them.

China gets more than $2.5 billion a year in foreign government aid - and taxpayers and lawmakers in donor countries are increasingly asking why. Because that is the biggest fraud since the Wall Street bailout and the Great Canadian bank bailout Harper lied about.

Communist politicians in China are the wealthiest in the world. Those hypocritical gluttons are the ones that need to feed the poor in the rural areas instead of pimping them off to the rest of the world so they can intercept that foreign aid and put it in their own pockets. God as my witness, giving Communist China control of our debt and giving them Canada's oil rights is a far bigger threat to world peace than any smoke and mirror Islamophobia. Mark my word.