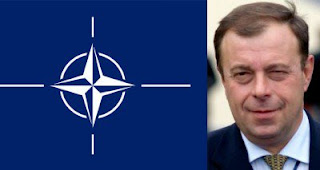 Your News Wire is reporting that Yves Chandelon, the Chief Auditor for NATO, was found dead of a suspicious suicide in the city of Andenne in the Belgian Ardennes. Right after he had discovered that the US was supotrting ISIS just like the TV Series American Odyssey.

NATO funding ISIS is nothing new. Russia was supporting Assad in Syria while the Americans and the Israelis were supporting ISIS and the Rebels. When British Weapons Inspector Dr. David Kelly blew the whistle on MI 6 for launching Operation Mass Appeal and intentionally sent the media false reports about Iraq's weapons of Mass Destruction he also died of a suspicious suicide just like Gary Webb and so many other whistleblowers.

Instead of arguing whether or not Gary Webb or the Chief Auditor for NATO committed suicide or was murdered, we need to focus on what information they brought to light that the CIA wanted hidden from the public. Watch the movie Kill the Messenger. Look into the facts surrounding American support of ISIS. Every time they kill a whistleblower we need to bring attention to what the whistle blower was trying to expose. That is what we need to focus on.

Yeah I'm crazy. Crazy for thinking anyone out there gives a sh*t. Yet when push comes to shove there is nothing more crazy than Operation Northwoods. That is a historical fact.

The British Sun reported that Peter Polshikov was also reportedly found dead from gunshot wounds in his home in Moscow soon after news broke of the assassination of Russian ambassador in Turkey, Andrey Karlov. It is alleged two empty bullet shells were found in the flat in the city and that a gun was discovered under the sink in the bathroom. In February of last year CBC reported that Boris Nemtsov, a charismatic Russian opposition leader and sharp critic of President Vladimir Putin, was gunned down near the Kremlin. Are we beginning to see a pattern?

Just like how Susan Lindauer testified about the Lockerbie bombing. Major Charles McKee, of the Defence Intelligence Agency, filed a complaint about the CIA's drug trafficking in Lebanon. McKee, Gannon and three other members of the team decided to fly back to CIA HQ and expose the COREA unit’s deal with al- Kassar. They booked seats on Pan Am 103 which blew up over Scotland as the result of a "terrorist" attack. Yet the only motive anyone had to blow the plane up was to kill the whistleblowers on their way to Langley.

Posted by Dennis Watson at 1:59 AM