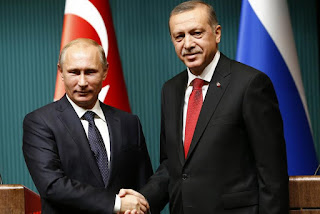 What's wrong with this picture? We are all relieved to hear a cease fire agreement has been reached in Syria but why was it reached between Turkey and Russia? I thought it was suposed to be a civl war. Evidently not.

Turkey wasn't just representing Turkey. They were representing NATOs support of ALL the rebels while Russia represented troops loyal to Assad. If neither party had got involved it is quite likely the horrible devastation to civilians would not have lasted so long creating such horrific turmoil for refugees. So Russia bombing civilians in Aleppo was bad but helping negotiate a peace settlement was good. Something that the CIA is try to upstage with nonsense.

Today I saw a news clip from an American media source and they were going on about this absurd nonsense claiming Russia hacked the US election again. I thought STFU. Why the hell are they still going on about that ridiculous nonsense? Because Obama is pushing the CIA fraud.

The New York Times is reporting that " The Obama administration struck back at Russia on Thursday for its efforts to influence the 2016 election, ejecting 35 Russian intelligence operatives from the United States and imposing sanctions on Russia’s two leading intelligence services."

First of all the CIA's claim that Russia hacked the US election is absolute nonsense. Putin was right when he said they need to get over it and they are just being sore losers. Putin pointed out that not only was Donald Trump elected but Americans also elected a Republican House and Senate. What did we hack that too he said. The CIA's claim is absolute nonsense. We know it is the CIA spamming the main stream media with that nonsense because it came from a fraudulent CIA report that was indeed laughable. So now Obama is running interference for the CIA.

Don't get me wrong. I liked Obama. He was a MUCH better speaker than George Bush. That idiot was too painful to listen to. Obama was a very intelligent speaker. I don't have a problem with Obamacare either. I'm from Canada. The American medical system is horrific. I just want to be clear in that the Obama Deception was tied to the Bush Clinton Fraud.

Obama used executive privilege to hide his administration's illegal activities in Operation Fast and Furious. That was obscene. Nixon tried to hide Watergate by using executive privilege but the court didn't let him. Fast and Furious was much worse than Watergate. They were selling guns to the Mexican Cartel and bring back tons of cocaine as payment. Iran Contra never stopped. The Washington Times confirmed that it was a CIA operation. Hilary Clinton was at the root of it.

So now the big news is that Yves Chandelon, the Chief Auditor for NATO, found out that the US was supporting ISIS. We knew this all along. Obama is trying to distract us from that fact with more absurd CIA smoke and mirror nonsense.

On a more positive note, it appears that our prayers for Aleppo have been answered.