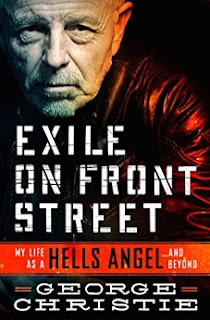 I finally started reading George Christie's new book Exile on Front Street. It is freaking awesome. The preface contains that quote about Outlaws I previously posted:

That sets the stage quite effectively. In the introduction he states "Undercover cops and informants who have written about the club paint members with one brush. In those books, we're one dimensional criminal scum. Most outlaws who write about the life are just as bad. According to them we are heroic freedom fighters living only to ride." He then explains it's not all black and white which is very true. You simply can't stereotype everyone in anything.

His book is worth reading. He is someone I can endorse. The movie he made, the Last American Outlaw was profound and has inspired me to embark on three separate adventures starting this summer. The book is helpful because he addresses the betrayal of being out out in bad after he left the club and about being falsely accused of being a police informant when he wasn't. He tries to remind us what the dream originally was. As Pink Floyd once said, take heed of the dream.

Be advised that this blog will move forward not backward. Lead, follow or get out of the way.