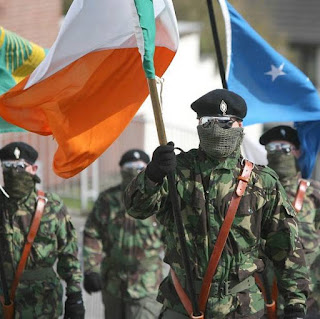 The Irish Times is reporting that a former chief of staff of the Real IRA named Aidan O’Driscoll aka the Beast died after he was shot three times today in Cork. We know that if he was shot in Cork, he wasn't shot by the Protestants so the UDA, UVF or the UFF are out. Looks like it was obviously internal so to speak.

It appears that I'm a bit out of the loop so I am. I've been back from Ireland for 26 years now. The interesting thing is that Aidan O’Driscoll and Alan Ryan from the Real IRA waged a war against drug dealers in Dublin. So here we see the Real IRA start doing what the original IRA did back in Belfast. They start shooting drug dealers dead. Aidan does time in prison because he was a member of an illegal organization. So here we have a paramilitary organization waging war with drug dealers and the government deems them an illegal organization and sends them to jail. So which side is the government really on then? Are they supporting drug dealers? This has become somewhat problematic so it has.

The Independent reported that "However senior sources say the Real IRA was simply demanding large sums of cash off criminal gangs and if they refused to pay up they became targets for the feared dissident gang who traded under the IRA name." Hmmm... That's possible too so it is. The stories I could tell. It's hard to sift out the truth between the lines so it is.

Sounds like things are heating up in the Holy land again only this time it's about drugs.

The Irish Proclamation declares "we pray that no one who serves that cause will dishonor it by cowardice, inhumanity, or rapine." When I first arrived in Ireland many yeas ago I landed in Dublin right after the IRA had kidnapped a Dentist and held him for ransom. That was a criminal act. It had nothing to do with fighting for freedom. It was simply extortion. After they kidnapped him they cut off his fingers and sent them to his family with the ransom note. That was a brutal and senseless act that violated the Irish Proclamation. It was inhumane rapine.

That was Dessie O'Hare. He had been kicked out of the IRA and the INLA at the time. O'Hare had broken away from the remaining INLA leadership in Belfast and set up his own group, the Irish Revolutionary Brigade, which operated in the border region out of Castleblayney. It was described as having "a handful" of members. In 1987 O'Hare and three other INLA members kidnapped John O'Grady, a dentist from Dublin, and demanded a IR£1.5m ransom. The Dentist, John O'Grady, passed away in September of this year. So in reality Dessie O'Hare didn't represent the IRA or the INLA, he only represented himself.