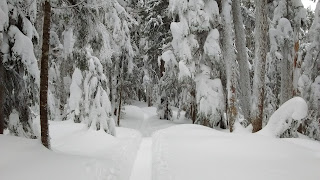 I snowshoed up to St Mark's Summit along the Howe sound crest trail on Cypress today. That's the trail the two lost hikers were last seen on. This is the actual begining of the trail: 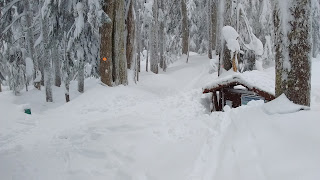 As I said before, it's possible but unlikely someone said I'm going to hike all the way to the Lions in winter on Christmas Day. No one with a brain hikes the Lions in winter. It is far more likely they cut up Christmas Gully on the back of Sky Chair on Mount Strachan and perhaps went over to the adjacent peak since the top of Strachan is all blocked off for skiing right now.

There wasn't much visibility from the top of St Mark's Summit today. 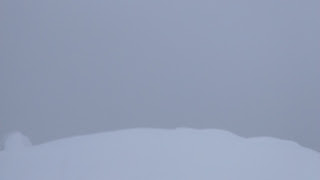 I made a previous post showing what you can see from there on a clear day. Today you could see tracks that someone had gone on beyond St Mark's Summit but that trail was not packed and it started snowing so I came back. Hiking all the way up Unnecessary Mountain from there in winter is a long haul. The back country skiers are better equipped for that. 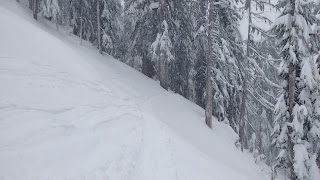 I got concerned and said OK this is not the way I came up regardless of what the orange markers are telling me so I hiked back to the fork in the trail to see where the other one went. Sure enough another orange marker appeared then another and I clearly recognized this was the trail I came up on. The thing is, what on earth was that other trail? It would have been easy for anyone to have taken that trail back instead.

A friend from work once told me they tried taking the BCMC up Grouse mountain instead of the Grouse grind for a change. They kept following the orange markers until they became quite concerned that it was going way off in the wrong direction even though there were orange markers on the trees marking the trail. Then someone told her that was the Lord Baden Powell trail which crosses over the BCMC. She must have changed trails without noticing. That could have easily happened to the lost hikers on the Howe Sound Crest trail. If anyone knows what trail crosses the Howe Sound crest trail on the way back from the top of St Marks summit, I'd like to know. I dont think it was the Lord Baden Powel trail because it didn't have those unique trail markers. Time's running out. I certainly hope the hikers are found.