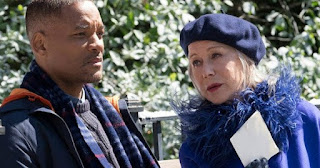 I didn't see the new Star Wars but I did see Collateral Beauty. I was in the mood for something different. I read a couple of lousy reviews but wasn't swayed. I like to make up my own mind for myself usually and in this case I'm very gad I did. I thought the movie was profound.

F*ck the haters. Haters gonna hate. What the hell were you expecting? What are you all like Shallow Hal incapable of solemn reflection and unable to produce a rational thought? The point of the movie is to get people thinking as different people deal with grief different ways. Some people retreat into their shells. Others turn to drugs and alcohol. I think all of us have experienced some kind of loss or grief in our lives and eveyone likely knows someone who abuses drugs or alcohol.

I really liked Will Smith in the Pursuit of Happiness. I had to walk out of the theatre during the scene when he was homeless with his son. It hit a little too close to home. I was told it had a happy ending if I had stayed but I wasn't able to go through that at the time. 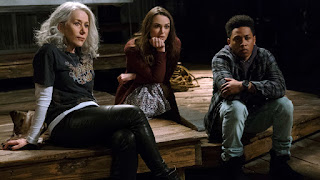 I would highly recommend Collateral Beauty to anyone with a brain who is wiling to think outside the box this Christmas. Elizabeth from Pirates of the Caribbean played love. Although the movie didn't go into depth expanding on the meaning of the title it did touch on it and imply that when something bad happens there is always something else to be grateful for like the song Photograph by Ed Sheeran. I would like to use the Collateral Beauty title as a theme for my 2017 Summer Jam and pick up where that movie left off.

Right now I am really enjoying Lindsey Stirling's Gavi's Song. It's peaceful and elegant. The song is about her best friend who went to the hospital for cancer. They started writing the song together and promised they would finish it together when he came home from the hospital. Tragically he died before they could finish the song so after a long period of grieving she finished the song and created a masterpiece. That is collateral beauty. It's the last song on her album Brave Enough.

I would like to add that right now it is indeed cold as f*ck on the motorcycle but it's not as cold as being homeless. It infuriates me when I hear people say the homeless are homeless because they want to be. That is absurd. People need homes not drugs. With all that money we are pouring straight into the predatory drug dealers pockets who are brutalizing the homeless as we speak we could build a lot more affordable housing instead.