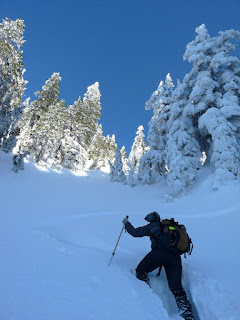 It is with sadness we hear the news of two hikers lost snowshoeing on Cypress mountain since Christmas day. Their prognosis at this point does not look good. People keep stressing the importance of not going off the main trail or skiing out of bounds for good reason.

So my first question was were where they? One newspaper photo was at the beginning of the trail up Hollyburn ridge which is a well marked and well travelled trail. Snowshoeing on that trail is safe. Going beyond that trail at the top of Hollyburn ridge is not.

One media report claimed Search and Rescue received a tip claiming they saw two Asian hikers snowshoeing on the Howe Sound Crest Trail. That is a well marked trail in summer but is much more difficult in Winter. It goes all the way to the Lions which is much easier during late summer. One of the people lost was an experienced hiker. Which tells me it's most likely that they were trying to access the Christmas gully on the back of Sky chair on mount Strachan. That is a very common route in winter and climbing up the peak is very challenging in fresh snow and difficult to find in winter. That trail isn't as well traveled and packed as the Hollyburn ridge trail is.

If they skipped the Christmas Gully turn off and kept going along the Howe Sound crest trail, who knows where they could be. The trail goes up Saint Mark's summit, up Unnecessary mountain all the way to the Lions themselves. Getting to the middle of the two peaks on the Lions so you can continue along that trail to Porteau cove is insanely dangerous during winter. In summer when the trail is bare you have to cut across a very narrow path on the side of the West lion. When there is snow, that tiny path in inaccessible. It is not something I would consider doing in winter.

With 30 cm of fresh snow they should be able to tell if anyone has attempted to climb Unnecessary mountain recently. In a meter of fresh snow they wouldn't even be able to tell if someone had tried it recently and right now we are getting pounded with fresh snow. It is certainly possible for an experienced hiker to dig a snow cave and survive yet at this point is really doesn't look good. Let's hope for the best.

Update: It might be worth finding out what trail crosses the Howe Sound Crest Trail on the way back from the top of St Mark's summit and check that one for the lost hikers.

Posted by Dennis Watson at 3:10 AM