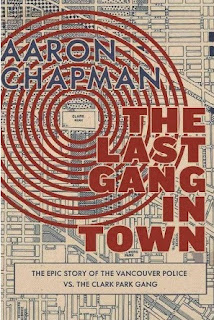 Aaron Chapman recently put out a book called The Last Gang in Town: The Epic Story of the Vancouver Police vs. The Clark Park Gang. This is a historical look at a Vancouver gang back in the /70's. The description on Amazon reads: "A riot at a Rolling Stones concert opens this compelling story of a year-long confrontation in 1972 between the Vancouver police and the Clark Park gang, a band of unruly characters who ruled the city's east side. Corrupt cops, hapless criminals, and murder figure in this raucous history with contemporary overtones that questions which gang was tougher: the petty criminals, or the police themselves."