Former mayor of Laval pleads guilty to breach of trust 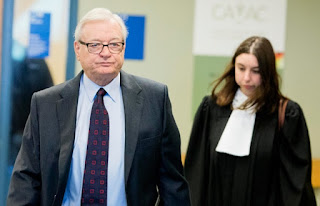 CBC is reporting that "the man once known as the 'King of Laval' is on his way to jail tonight. Gilles Vaillancourt, who ran Quebec's third-largest city for more than two decades, pleaded guilty Thursday to fraud, breach of trust and conspiracy to commit fraud, dating back to his time as mayor. Under an agreement reached with the Crown, Vaillancourt will voluntarily repay the city $7 million from a Swiss bank account, as well as roughly $1 million in other assets, including his condominium. He is also waiving his pension. The plea deal calls for Vaillancourt to spend six years in prison. He could be eligible to apply for parole in a year." The plea agreement resulted in the gangsterism charges against him being suspended.

What's the difference between BC and Quebec? Quebec has an anti corruption task force, BC does not. Quebec is confronting organized crime, BC is not. That's the only difference.

Posted by Dennis Watson at 4:46 AM