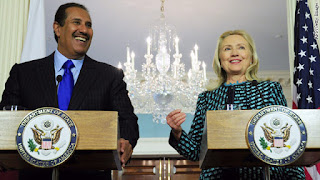 Reuters is reporting that "Hacked emails published by Wikileaks this week appear to show Qatar pledging to donate $1 million to Hillary Clinton's family's charitable foundation, despite her promise to curb new donations by foreign governments while U.S. secretary of state."

Why would Qatar "donate" $1 million to Hillary Clinton personally? Wait 'till I tell ye. Qatar arms ISIS. Julian Assange claimed that Hilary Clinton was shipping arms to Qatar for ISIS. This $1 million payment is part of the paper trail.

It is rather amusing how the Rothschilds owned American media is spinning this one. Front Page Magazine is reporting that "WikiLeaks released an August 2014 e-mail from Hillary Clinton to John Podesta, who currently serves as her campaign chairman, stating that the governments of Saudi Arabia and Qatar have been providing clandestine financial and logistic support to ISIL and other radical Sunni groups in the region. Evidently President Obama has not heeded Hillary’s concern, or chose to ignore it." AYFKM! That's like blaming Obama for Operation Fast and Furious when Hillary Clinton was the author of it. Hilary Clinton wasn't telling Obama to avoid Qatar, she was accepting money from them for services rendered.

"What makes Hillary’s e-mail noteworthy is the irony that the governments of Saudi Arabia and Qatar, and groups aligned with them, have not only been major funders of ISIS and other jihadist organizations, as she indicated, but they also have been big funders of the Clinton Foundation for years. Hillary has had no trouble taking money for her foundation from regimes that fund terrorists, oppress women, execute or imprison gays and apostates, and severely punish the exercise of free speech."

"In a letter from Senator Charles Grassley, Chairman of the Committee on the Judiciary, to Attorney General Loretta Lynch dated August 15. 2016, Grassley noted that prior to Hillary Clinton’s tenure as Secretary of State, “Qatar was the recipient of approximately $271 million in military related export deals. During her tenure, Qatar was the recipient of approximately $4.3 billion – a 1,482% increase.” Saudi Arabia received a 97% increase in such export deals during her tenure."

"With Hillary Clinton as president, we may hear some tougher talk than we have heard from President Obama criticizing Saudi Arabia and Qatar for their support of jihadist groups and their funding of the spread of jihadist ideology. However, it will be just words, since Hillary will not want to kill the goose that lays the golden eggs for her foundation."

ISIS is a creation of the CIA and Hillary Clinton is making a lot of money arming them. 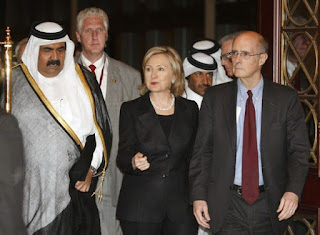 Israel admitted to providing aid to Syrian rebels to overthrow Assad. Just like the Americans. They admit to supporting al-Nusra who are in fact Al Qaeda and are closely affiliated with ISIS. So once again the Americans and the Israelis are supporting ISIS just like CSIS.