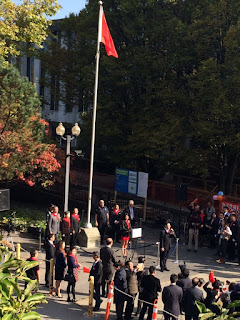 CBC is reporting that "The symbolism and meaning of a ceremony at Vancouver City Hall to mark the 67th anniversary of the founding of the People's Republic of China is raising concerns with some Chinese-Canadians. On Friday, about 300 Chinese government supporters turned out to watch acting Mayor Kerry Jang and Richmond East MP Joe Peschisolido don red scarves and raise the national flag of China in front of city hall. When news of the unpublicized event was posted online over the weekend, it sparked strong reaction from those in the Chinese-Canadian community who don't support the communist government."

The Vancouver Sun reported that Meena Wong, former mayoral candidate for COPE said “I was shocked, to have my city councillor in my city hall raising the flag wearing the symbol of loyalty to communism, I was dumbfounded.” Wong was a young child in Beijing during the Cultural Revolution and recalls the persecution of her parents and grandparents. For her and many others “it is a painful memory to see that red flag and scarves,” she said.

CKNW reported that Meena Wang delivered a petition to the Mayor’s office. Kerry Jang minimized the concerns claiming they were racist which is beyond absurd and totally offensive. The people complaining are Chinese Canadians who have endured atrocities under the Communist regime. Rebel Media is reporting that Thursday "Wong was joined by Louis Huang from the Alliance of the Guard of Canadian Values. His group is made up mostly of Chinese-Canadians who are fearful that Canadian values are being shoved aside in favour of closer and cozier relations with the government of China."

Vancouver City Hall is well aware of Communist China's secret holocaust with regards to organ harvesting from political prisoners. They went to court to force Falun Gong practitioners to take down protest signs outside the Chinese Consulate in Vancouver. Hoisting the Communist flag at Vancouver City hall knowing about China's illegal organ harvesting is endorsing that heinous practice and opposes everything that Canada has previously stood for.