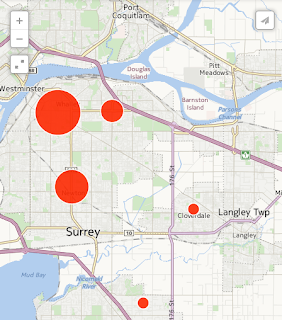 The Vancouver Sun is reporting Linda Hepners' press release unveiling her crime promotion strategy for Surrey. The same article was also printed in the Vancouver Province and the Vancouver 24 Hours. Word for word thanks to Post Media mergers and the Attack of the Clones. This new strategy is nothing new. It's just more smoke and mirrors to appease the masses and pretend she is doing something about crime in Surrey. We've heard this all before. You can fool some of the people some of the time but you can't fool all of the people all of the time.

Remember when they promised to map crime statistics instead of suppressing them? What a wonderful world that would be if they ever followed up on that promise. If they did that they would see the highest crime rates in Surrey correspond directly to where they let crack be sold in public. Instead of arresting the crack dealers that are selling fentanyl to unknowing customers, Linda Hepner and her media circus is dancing all around the crack dealers promoting their cause and their business. If we do not arrest the crack dealers that we see selling crack in public all this other bullsh*t is a complete waste of time. You are not fooling anyone any more.

Last year Tom Zytaruk from the Surrey Now reported that Surrey mayor says new strategy is not to comment on crime. Now all of a sudden she cares? Not likely. She only cares about appearances. The problem has not changed. If she cared she would have done something.