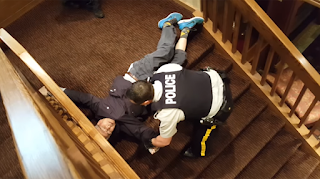 CTV is reporting that "Shocking video has surfaced showing an RCMP officer dragging an elderly man down a flight of stairs following a heated strata meeting in Coquitlam Thursday night. The footage, which was uploaded to YouTube, begins with a group of officers surrounding an older couple in the stairwell of a Best Western hotel, where the strata was holding its annual general meeting. As a young girl cries and screams, one Mountie can be seen grabbing the elderly man, who is lying on the ground, and pulling him toward the stairs."Stop resisting," the officer yells before apparently yanking the man down a staircase."

The Coquitlam RCMP have a horrible reputation. They are the ones that kicked in the whistleblowers' door and seized all his hard drives after he went public about Jim Brown. They knowingly destroyed evidence by deleting his hard drives before returning them to him.

In this case the video is indeed very disturbing. The cop is seen dragging the senior down the stairs. Totally inappropriate. What's even more inappropriate is Superintendent Sean Maloney's response to the video. He says they're going to investigate the matter by looking into why they were called to the meeting trying to find some way to blame the senior.

During a protest people are often arrested for refusing to leave. They sit down and don't resist they simply refuse to comply. That is what this senior is doing. In those cases the police pick them up and carry they away. They don't drag them down a flight of stairs. It's very unprofessional as is the Coquitlam Police Chief's response. No wonder they destroyed evidence in the Jim Brown case. They have a lot to hide.

Posted by Dennis Watson at 4:31 AM