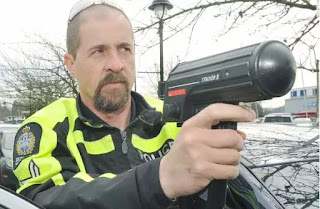 The Vancouver sun is reporting that Cpl. Grant Gottgetreu from the West Vancouver police department is bragging about seizing 2,000 cars for speeding. This guy is a piece of garbage and is the reason this stupid law should be repealed. This is why people hate cops.

We all thought it was funny when a member of the Hells Angels was caught on camera driving like an asshole speeding excessively weaving in and out of traffic in a very unsafe manner. Yet the bottom line is that seizing people's vehicles for speeding on a open stretch of the freeway is over the top. It gives the police and the government far too much power which in this case has clearly gone to their head. This guy is no hero. He is a villain. The police are letting drug dealers sell crack and fentanyl in public in the DTES and on the Surrey strip but they are seizing cars from hard working Canadians that speed on a freeway. That is unequal protection of the law. Who do these guys work for? Themselves or the taxpayers that pay their wages and elect the government that makes the laws to protect them not enslave them. Get a life. Get a real job.

Seizing someone's car after three drinks is also excessive. Cops are the worst DUI offenders. They have a tax paid bar on site to get drunk after work and drive home impaired all the time.

Posted by Dennis Watson at 1:00 AM