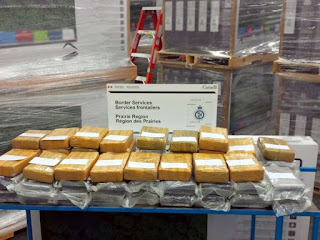 The Calgary Herald is reporting that "Authorities intercepted $10 million worth of cocaine at Alberta’s Coutts border crossing in the biggest such seizures of the drug in Prairie history. The 202 kg drugs were packed with goods in three separate shipments aboard commercial trucks, beginning with 60 packages of cocaine weighing 69 kg secreted in a cargo of televisions discovered Sept. 2. Another 40.5 kg of the drug was found two days later amid cargo of 2,000 Halloween costumes - the two making up the largest weekend seizure numbers for the Canada Border Services Agency’s (CBSA) prairie region.

The largest was yet to come on Oct. 10 when 83 bricks of cocaine weighing 92.74 kg were seized from another commercial truck where it was hidden throughout its cab" The Calgary Sun is reporting that "In all, five men have been charged in the three busts with importing a controlled substance and possession for the purpose of trafficking. The suspects hail mainly from B.C. The amount of cocaine being shipped is definitely organized crime-related."