Susan Lindauer and the War on Whistleblowers

Susan Lindauer was a whistleblower who was the second non Arab American ever indicted under the patriot act. They used the Patriot Act to remove her rights to a fair trial because she was a whistleblower. This is a must watch video to set the stage for the next round of discussions: https://www.youtube.com/watch?v=mQjTYmDKPaI

"My law firm defended Ms. Susan Lindauer against federal charges of acting as an unregistered Iraqi Agent in conspiracy with the Iraqi Intelligence Service. I assure you that Ms. Lindauer's story is shocking, but true. It's an important story of this new political age, post-9/11."

"As her attorney, I maintained very high legal standards for validating Ms. Lindauer 's claims that she worked as a U.S. Intelligence Asset, supervised by members of the CIA and Defense Intelligence Agency. Before agreeing to represent her, I took steps to corroborate her story through independent sources that I considered to be extremely high caliber. Those included former Congressional staff, international journalists, and several U.S. and Scottish attorneys involved with the Lockerbie Trial at Camp Zeist. I know some of these people socially and professionally. Ms. Lindauer's story checked out. She has an extraordinary personal history, and I believe it's true." Brian Shaughnessy July 1, 2010 taken from the forward to her book Extreme Prejudice. 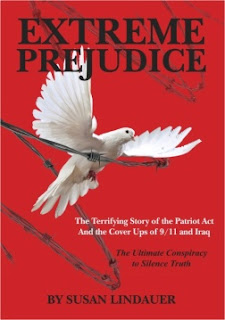 Speaking of CIA drug trafficking, Susan Lindauer claims the CIA were accused of heroin trafficking in Lebanon. She claims the Defence Intelligence Agency filed a complaint about it and had conducted an investigation gathering evidence in Lebanon to prove their case. They boarded Pan Am flight 103 with the evidence and it was subject to a "terrorist" bombing over Lockerbie, Scotland. She claims the real person responsible for the Lockerbie bombing lives 8 miles from her house, in Fairfax County, Virginia with asylum and protection from the CIA.

Turns out it was indeed Major Charles McKee, of the Defence Intelligence Agency, who filed the complaint and gathered evidence in Beirut. McKee, Gannon and three other members of the team decided to fly back to CIA HQ and expose the COREA unit’s deal with al- Kassar. They booked seats on Pan Am 103. In his book, Lockerbie: The Tragedy of Flight 103, Scottish radio reporter David Johnston described how CIA agents helicoptered into Lockerbie shortly after the crash. They were looking for McKee’s suitcase.

Immediately after the Lockerbie Bombing, a quantity of heroin was found on a Lockerbie golf course and a suitcase full of heroin was discovered by a farmer a couple of miles to the east. (The Lockerbie trial: a top-level cover-up? The Guardian)

Posted by Dennis Watson at 7:26 AM