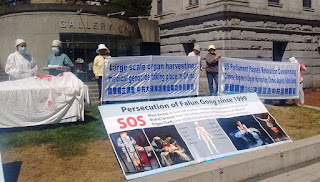 For the month of August the Falun Gong protest has moved from the Chinese consulate in Vancouver to the Art Gallery. They are raising public awareness of the current atrocities political prisoners are facing in Communist China and asking people to sign mail in cards to their member of parliament in preparation for Justin Trudeau's' upcoming trip to China next month. This is a serious issue that needs to be addressed with our trading partner.

Organ harvesting is indeed big business. Ethan Gutmann has written two books about China's practice of organ harvesting from political prisoners. In a video posted on his website he talks about Dr Ko from Taiwan stumbling into something terrible in China. He was looking into the quality of care for transplant patients. Elderly people in Taiwan who wanted to get an organ. China is obviously the go to place for that. The wait list in Taiwan was a death sentence for someone who need a new liver. In 2004 / 2005 China was advertising prices for organ transplants. Dr Ko goes to China and speaks with the doctors there about the quality of organs. Dr Ko was told you dont have to worry about the quality of these organs because they are Falun Gong. These are people that don't smoke or drink. They practice very healthy chi gong.

Everyone in Taiwan knows the Falun Gong are arrested and tortured in China. The fact that the government was selling organs from Falun Gong political prisoners was something new. It clearly is a big market. On some of the literature posted at the Art Gallery they listed the going proces for various organs. It is big business indeed.

Now that we have entered the Twilight Zone we need to discuss Stephen Harper's all inclusive trade agreement with Communist China. We realize that compensation awards under NAFTA chapter 11 we're insane. The agreement said private corporations could sue the government at a tribunal if the government made a law that stood in it's way of making a profit. Typical cases that came to light were companies that wanted to export toxic chemicals like PCP. I kid you not. So if NAFTA chapter 11 prevented governments from banning hazardous wastes, how does this new Trade agreement with China deal with organ harvesting from political prisoners? Can they sue the government at a tribunal if the government makes a law preventing them from making a profit? Do we see where these insane trade agreements are taking us? They have nothing to do with free trade and everything to do with giving up our sovereignty and our democracy.

The fact that this kind of atrocity can actually exist in our day is astounding. What's even more astounding is the local mainstream media's refusal to report on it. What is happening to our country? Where are the right wing better dead than red conservatives? This is your opportunity to show the world the evils of communism. More importantly this is our opportunity to speak out against a modern day genocide.

The Falun Gong protest is on the Howe street side of the Vancouver Art Gallery Teusday, Thursday, Saturday and Sunday from 12:00 Noon t 3:00 PM weather permitting. They also have a table and banner set up outside Canada Place. 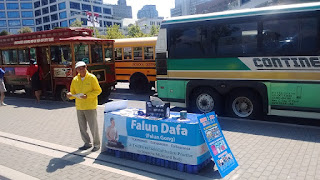 Please take the time to sign their petition and fill out a mail in card for your MP. This issue is a lot more important the the front page news of a family dog in Surrey getting hit by a stray bullet. We are talking about a modern day genocide. 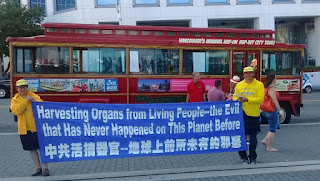 Update: It turns out back in 2014 the Epoch Times reported that "During Prime Minister Stephen Harper’s recent visit to China, the Subcommittee on International Human Rights unanimously passed a motion condemning the Chinese regime’s practice of forced organ harvesting from prisoners of conscience. This is the actual motion.

David Matas and David Kilgour are in a movie about this shocking atrocity called Human Harvest. This is the trailer on youtube. You can watch the entire movie on their web site.

Hard to Believe is another documentary on this international crime. "This is one of the most catastrophic human rights violations of our time." This is a Canadian petition.

This is far worse than anything Cuba has ever done. Doing business with China but boycotting Cuba is a colossal double standard. Stephen Harper knew about China's organ harvesting when he handed over our oil rights to them and signed that insane trade agreement with them. Who's the real Communist now? It's all about manipulating the media. 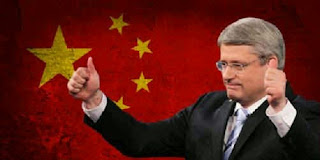