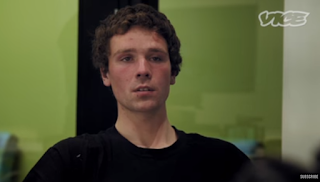 A blog reader sent in a link to this powerful documentary on Vice about the Fentanyl drug trade in Calgary. It talks about how addictive the drug is and how it is much worse than heroin. This video talks about people who are addicted to Fentanyl and are intentionally buying it. That is no doubt what the local drug dealers are trying to create here in BC by lacing other drugs with it or as in the recent Fentanyl fatality in Shakers, selling straight up Fentanyl and pretending it's cocaine. These drug dealers who are cooking crack with Fentanyl and selling it to people unkowlingly are complete pecices of sh*t. Not arresting them for doing that is the epitome of insanity.

Just when you think it can't get any worse it does. Fentanyl is worse than Oxycontin and now there's a new drug called Carfentanyl which is even worse than Fentanyl. Border agents recently seized a kilo of the stuff in Vancouver that was enroute to Calgary. Stop the greed.