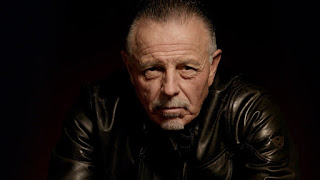 I recently found out that George Christie, long time President of the Hells Angels Ventura Chapter, was out in bad so I reached out to him and asked if he would do an interview. I can tell you one thing - this guy is the real deal. There have been other fly by night flashes in the pan that I refused to endorse. This guy I do endorse. Completely. He is what they meant when they made up the term old school. These new kids on the block have no idea what old school is simply because they've never been to school. We look forward to hearing more from him.

They falsely accused him of cooperating with law enforcement after he left so he wrote a new book that comes out September 20th 2016 to set the record straight.

So when and where did you first join the Hells Angels?

I came around the Los Angels Hells Angels in the mid seventies, in 1977 I became president.

What was your involvement with the Ventura chapter?

I along with another member started the Ventura Hells Angels in 1978, and was president till 2011.

What is your new book about?

My book is about my introduction into the outlaw lifestyle, tenure as a leader in the Hells Angels and my departure from the club.

What is the history channel series about?

The History Channel show, Outlaw Chronicles was about my adventures in the outlaw motorcycle world.

LA is pretty much the centre of the world as far as gangs go. New York may well have invented gangs but LA certainly perfected them. The Mongols are huge in Southern California. What was it like being a leader of the Hells Angels with so many rivals around?

Being a leader in Southern California taught me the art of negotiation. I was at the first confrontation we had with the Mongols, that was 1977 and really the beginning of a war that still exists to this day. I watched them become one of the premier outlaw motorcycle clubs on this planet. I think all they wanted was respect and no one can say they haven’t earned it.

It has been said that you and Sonny Barger had different styles of leadership. Do you care to comment on that? Was he the one that had you put out in bad standing after so many years of faithful service?

Sonny and I had not only had different leadership styles, but different visions as leaders.

Have you ever cooperated with law enforcement?

Do you know of Ruben Cavazos aka Doc? Do you think he cooperated with law enforcement?

I know Doc, but I think that question should be addressed to the Mongols.

What is your opinion on the criminal organization status of the Hells Angels?

The Hells Angels are not a criminal organization, but have members that have been found guilty of criminal acts. But so have politicians, cops, attorneys, etc.

Have you ever heard of TBM Fresh Start? Would you be interested in starting something like that in LA?

I have heard of different fresh start programs, and would share my experiences and views with participants, but have no interest in starting a program like that at this point in my life. I am exploring a new TV show concept that would focus on the justice system, but I am not at liberty to go any deeper on that subject at the moment.

George Christie's new book Exile on Front Street: My life as a Hells Angel and Beyond will be released September 20th 2016. You can preorder it now online. Peace.