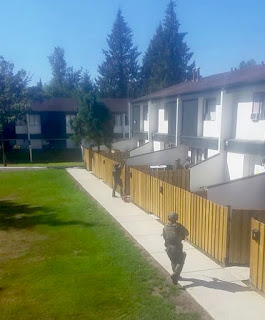 The Langley Times is reporting that "Heavily-armed members of the ERT (Emergecy Response Team) took part in a raid on a Townhouse complex at 5210 203 Street in Langley City around 10:30 a.m. Thursday (This morning). RCMP said it was a pre-planned execution of a search warrant on a unit in the complex and the ERT was there as a safety measure."

"A video posted online by a resident of the complex shows officers ordering the occupants of a two-storey townhouse to give themselves up. 'This is the police, we have your house surrounded,' one ERT member shouts. 'You are detained for investigation.' Three young men were escorted from the suite by officers in body armor. One person was taken from the scene in an ambulance, a witness said." I'm a bit confused.

Update: The Langley Times is reporting that A 35-year-old man and a 31-year-old woman were arrested at the townhome. Both had outstanding arrest warrants from several other firearms-related charges in B.C. A variety of weapons were seized, including assault rifles, shotguns, sawed off shotguns, handguns and antique firearms. Officers also found a large amount of ammunition, a silencer and many different drugs, including cocaine, methamphetamine, heroin and marijuana, which were “consistent with possession for the purpose of trafficking,” police said.