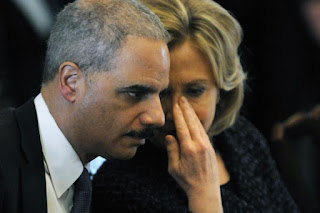 Interesting to see how the media is promoting Hillary Clinton in the next election. So much for being unbiased. I agree Trump is a raging lunatic but I am also very concerned that Hillary is even worse. After all she was the author of Operation Fast and Furious. She should be in jail not running for office. How those two won the nomination is a serious concern for everyone.

This recent article from the Washington Post which is the same MSM outlet that falsely attacked Gary Webb mocks Trump for some of the terms he has used to reference Hillary. He has called her Crooked Hillary, an enabler for her husband’s infidelity, Trigger happy, Perhaps the most corrupt presidential candidate ever, a dirty rotten liar, the devil, a pathological liar and now the founder of ISIS. Sounds about right to me. Lunacy aside those are all true statements which is causing Americans to ask what on earth has happened to the nomination process.

His ISIS quote was actually "We let ISIS take this position," Trump said Wednesday. "It was Hillary Clinton; she should get an award from them as the founder of ISIS." The crowd responded by chanting "Lock her up!" She most certainly should be locked up for her involvement with Operation Fast and Furious. Her current and former connections to the CIAs drug trafficking network do cause us to ask about her ties to ISIS since the CIA were the ones that created ISIS and fund it directly not just indirectly through the unlawful invasion of Iraq. 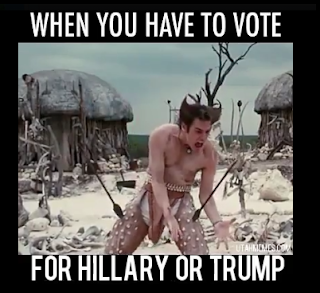 A friend from the United States posted a video clip of comedian Jim Carrey with an arrow in each leg comparing that with having to vote for Hillary or Trump. They likened it to being shot in the leg with an arrow. Which leg would you prefer? How about neither.

One American who commented on the Jim Carey video clip said "I don't know how both parties possibly could've chosen the two worst possible candidates. That definitely says something about how either the elections work now, or about us as Americans..."

Another said "Hillary is the most corrupt and if you don't believe that well you have a problem. I am voting for Donald trump I don't care what anybody thinks. I know what Hillary will do. I know what Bernie will do. So I am going to give trump a chance."

Other comments include: "Even if that's the 2 to vote for.. you don't have to pick one.. you can write in anyone's name... so.. write in bernie." "Voting for the lesser of two evils is still an evil. There's a third option Gary Johnson, the only logical choice!"

"Not a scam, serious stuff, had one jackass, don't want another one. By the way Hillary is the JACKASS for all you People who love liars, killers, scammers and did I mention jack-asses?"

So let's compare the American two party system with the one party system in China and Cuba. Is it really that different? I do not support the one party system. I'm simply using the analogy to show how our democracy is being eroded and how we are walking down the slippery slope of Corporate Communism which is taking us to the same place Cuba and China is in. Somewhere we really don't want to go.

Cuba and China are Communist. They only allow one political party. That is not a democracy nor is it a free republic. However, the two party system is being hijacked. Jesse Ventura was once asked his opinion about the two party system in the United States. He sarcastically said I think it's great. It's like being asked what do you want to drink - coke or pepsi? He said they are both soft drinks. They are a little bit different but basically they're the same. So whose fault is that?

The problem is in the nomination process. How do we fix it? I don't know. I do know a Communist Revolution is not the answer. That's like jumping out of the frying pan into the fire. However, the CIAs control of the media and the nomination process is a huge concern for every American who loves and cherishes freedom. 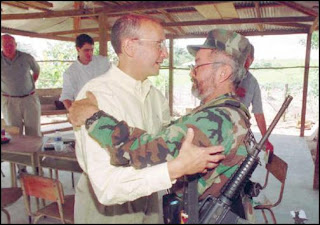 Senator Joseph McCarthy may have been a bit extreme but when he claimed Comunists had taken over the CIA he was absolutely right. History has recorded that. Wall Street funding FARC shows eactly where Corporate Communism really leads.

Now let's compare that to the one party system in China. I am told that there is a division within the Communist party in China. Two different schools of thought so to speak. Is it possible that the one party system could be more democratic than the two party system if there was in fact real room for different opinions to be expressed? Wouldn't that be ironic? Before we save the world we need to salvage and save democracy here at home. We need to preserve and protect the Constitution and the Charter of Rights because it is indeed hanging by a thread as we speak.