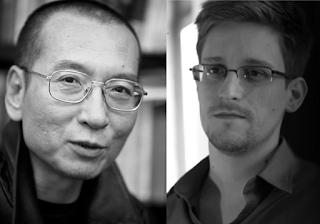 When I attended the Falun Gong candlelight vigil a reporter asked me what was my message to the CPC- the Communist Party of China. My message for the CPC is the same as my message for the CIA - torture is wrong. The CPC are torturing Falun Gong practitioners in China. The CIA have black prison sites around the world where they torture prisoners without a trial or legal representation. That is just as wrong. We need to denounce both practices not just one.

Let's compare their crimes. Liu Xiaobo is currently in prison for signing Charter 08 which was modeled after the Charter 77 movement in Czechoslovakia, calling for greater freedom of expression, association, assembly and religion, meaningful elections and a judiciary not controlled by the Communist Party. For that crime he became a political prisoner.

The United States however, already has a similar charter that has become entrenched by law in the US Constitution which clearly is an inspired declaration. Edward Snowdon's crime wasn't to make a formal request that the US Constitution be created, he simply reported a secret society within the United States that were willfully and knowingly violating the Constitution which they had sworn an oath to protect against all enemies both foreign and domestic. This secret society had in fact become a domestic enemy of the constitution and Edward Snowden simply reported that fact and their unlawful conduct. For that crime the US government wants to arrest him for treason in the same way China has done for Liu Xiaobo. It's no different. It's the exact same. 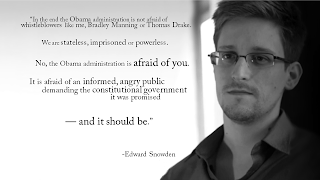 When we look at Charter 08 we see that it is indeed a noble quest. However, the United States has a similar document and the government is violating it. We also need to remember that the Arab Spring model is very dangerous. In Egypt the people protested and demanded the government be disbanded and replaced. By whom? Who are you going to put in their place? Sometimes the devil you know is better than the devil you don't know.

The US Constitution wasn't put in place through civil disobedience, it was put in place through an armed revolution. The Americans were incredibly fortunate to have good leaders like George Washington and Benjamin Franklin who, once they had the power handed it over to the people on a silver platter like Russell Crowe in the movie the Gladiator. China and Russia weren't quite as fortunate. That is why armed revolutions are also very dangerous since they could go either way.

In Contrast, Canada, unlike the United States, was not born in the rocket's red glare. Canada was born out of the patient trust in the political process. In my opinion, that would be a safer model for the people of China since there are bad guys on both sides of the fence. Liu Xiaobo is a political prisoner. He simply signed a declaration that the government opposed. He did not launch and armed revolution. He should therefore be set free. Likewise, Edward Snowden should be set free and the real traitors he exposed who broke their oath to defend the constitution should be put in jail instead. Edward Snowden is a Patriot. The NSA are not. The NSA and the CIA are doing the same thing the CPC is. One is no better than the other. We need to denounce both if we are sincere about our quest for freedom and social justice.

Sometimes we need to ask for "the courage to change the things we can, the serenity to accept the things we cannot change and for the wisdom to know the difference." In times of war we sometimes need to make compromises because different people want different things. That's democracy. Instead of forcing China to adapt the American model I have an alternative suggestion. How about adopting the Cuban model? Won't my old friends in CUPW be thrilled and shocked to hear me say that.

After the revolution in Cuba they established a Marxist Leninist atheist state. However, it was slightly different. They didn't ban religion altogether, they simply discriminated against it. They allowed religion but said you can't join the Communist party if you practice a religion and since there was only one political party allowed, no one who practiced a religion could run for office. Some might say this is a compromise and that is absolutely true. It is. However, it is better than the current situation where members of the Falun Gong are being put in prison and tortured for their religious affiliation. Tortue needs to stop. Murder for organ harvesting needs to stop. Yet China does not have to adapt the American model to do that. They can do that right now and still be Communists if they follow the Cuban model.

If the CPC did that, I would support them. I'd say let's do business. Let's make some money. Does Hong Kong or Tibet become free and independent? No they don't but Buddhists in Tibet would be free to practice their religion. The Dalai Lama could return home just not run for office. Hong Kong would remain part of China but they would be allowed to speak Cantonese if they so chose. Forcing people to give up their language is wrong. In time they will embrace Mandarin because they want to do business with mainland China. A system based on incentive is much more productive at accomplishing your goal.

Currently, in Canada I can buy a Christian Christmas nativity set made by Communist China. Can you not see the irony in that? China doesn't allow it's own people to practice a religion but is willing to make money off of religious goods they make for people living outside of China. Why not let them have a nativity set in China? If you build it, you are making money from it. If China embraced the Cuban model the CPC wouldn't have to fear about the Bamboo curtain falling like the Berlin wall did. They could keep their traditions while they respected the traditions of others. It would be a win win situation for everyone involved. Peace.