Cyrus the Great and the Persian Promise

I hiked up Sky Chair again today on mount Strachan at Cypress. You get a great view of the Lions and of Howe Sound. I met two nice young couples from Czechoslovakia on the way up and pointed them towards the lookout spot. When it's hot like this you need to bring lots of water.

Thursday I took the ferry over to Vancouver Island. I had an enlightening conversation with a very intelligent Persian woman who lives in LA while we were sailing through the Gulf Islands. We were talking a little bit about Iran and she mentioned an ancient Persian king named Cyrus. Her heart glowed when she spoke of him as she explained he was great because he established peace throughout the land by allowing religious freedom.

"Cyrus had no thought of forcing conquered people into a single mould, and had the wisdom to leave unchanged the institution of each kingdom he attached to the Persian Crown. In 539 BCE he allowed more than 40,000 Jews to leave Babylon and return to Palestine. This step was in line with his policy to bring peace to Mankind. A new wind was blowing from the east, carrying away the cries and humility of defeated and murdered victims, extinguishing the fires of sacked cities, and liberating nations from slavery." Cyrus liberated the Jews from Babylonian captivity.

It was a very enlightening conversation so it was. She said that she was a follower of Rumi who was a poet that wrote about divine love. What a wonderful concept. The world could use a little more divine love so it could. Seemingly Rumi is becoming very popular in the US and there is going to be a new movie abou Rumi that will challenge Muslim sterotypes.

I like challenging stereotypes. Personally I don't care if someone is Catholic or Protestant, Muslim or Jew, Buddhist, Atheist or Baha'i. A man should be judged by the content of his character not by the colour of his skin or the name on his dogma. That's why I say don't fear the hijab, get to know the person under the hijab. Segregation is the first step to racial disinformation. Once you segregate a group of people it becomes easier to slander them. Take the Falun Gong in China. They dont cut themselves. They're not a cult. If you use your brain and get to know them you will see that. Dark forces spend a lot of money on advertizing trying to convince us to live in fear. Yet God hath not given us the spirit of fear; but of power, and of love, and of a sound mind.

On my way back on the ferry there was a young Scottish girl my daughter's age playing a First Nations drum. She was from the Cowichan valley and made the drum herself. She did a great job. I asked if it was made of goatskin like most other drums and she said no Elk. I half jokingly asked if she had shot it herself. She smiled and said yes with a bow and arrow. It took me a few seconds to realize she was joking. She said she was wanting to paint some Scottish symbols on it because that was part of her heritage. Great idea. I have Irish symbols painted on mine.

While she was playing it she was also making the vocal sounds to go along with it. No words just sounds. Only it was very uplifting. No disrespect to the traditions but sometimes when they make the vocal sounds that go along with the First Nations drum it can sound kind of ear piercing. That's because it is often a heartfelt lamentation. Hers was slightly different and it was very pleasant to the ear. I mentioned how my son used to go to jazz festivals and I became familiar with listening to the sounds that jazz vocalists make. Again they are sounds not words. She said she had done that in the past. So there it was. She had taken a local tradition and remixed it with some of her own and created a masterpiece. Another Lindsey Stirling but unique. Peace. 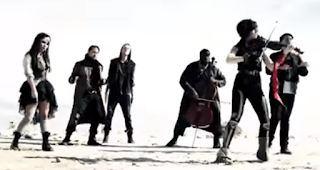 Posted by Dennis Watson at 2:52 PM