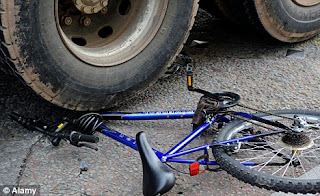 CBC is reporting that "A man was shot multiple times in West Kelowna Tuesday night during what police say was a targeted attack. West Kelowna RCMP say the 48-year-old victim was in a vehicle when he met up with a man on a bicycle at Hudson Road near Highway 97. The cyclist allegedly produced a firearm and started shooting at the driver. Then, police say, the driver hit the cyclist with his vehicle."

"The driver was rushed to hospital with serious but non-life-threatening injuries. RCMP used a police dog to find and arrest the alleged gunman, a 29-year-old West Kelowna man, who they say was hiding in the vicinity." So West Kelowna gets a drive by shooting on bicycle and the target runs him down in is car. Somewhat humours.

Posted by Dennis Watson at 3:24 PM