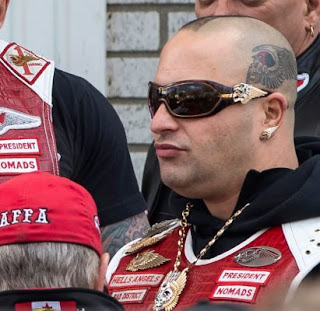 The Stopru is reporting that "The president of the Hells Angels Nomads Ontario, Martin Bernatchez, was the victim of an assassination attempt on Thursday night while camping in Granby." This is interesting. Last April Philippe Boudreau, the vice-president of the Ontario Nomads was shot in Quebec. Stopru claimed that shooting was the result of an internal conflict and asks if this shooting is also the result of an internal conflict.

Granby is in an interesting location. Several year ago the Rizzutos had a conflict with the D'Amico family of Granby. In August 2005, Francesco Arcadi told a sidekick that "bikers" of Granby wanted to "cut off his head."

TVA Nouvelle is reporting that Martin Bernatchez was hit by three bullets but is doing OK. They claim his colours is a bullet proof vest. He was shot around 2:30 AM in the EstriVal campgrounds. TVA Nouvelle is confirming that it appears to be an internal conflict and imply that it is likely because Quebec Hells Angels arrested during SharQ have now been released and want their territory back. Don't f*ck with Quebec. They will blow sh*t up. Je me souviens. 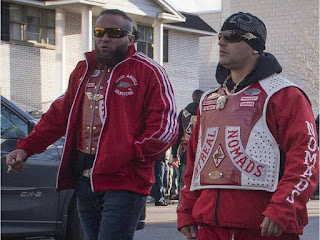