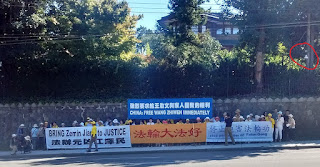 Today the Falun Gong returned to the Chinese consulate in Vancouver joining in a world wide protest objecting to China's refusal to let Wang Zhiwen leave the country and join his family abroad after serving a sixteen year sentence as a political prisoner. Anciently the Great Wall of China was built to keep invaders out. Now the CCP has turned the Great Wall of China into another Berlin Wall that keeps political prisoners detained and prevents them from leaving. 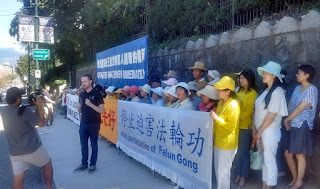 Rebel Media was there to cover the event. They did a great job covering the Falun Gong protest at the Vancouver art Gallery. Rebel Media is non mainstream and claims to represent conservative viewpoints. It's nice to see other views being expressed. Glad to see they are concerned about the atrocities of Communist China. 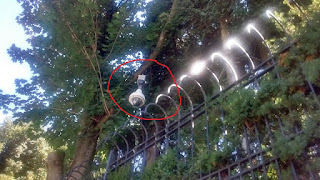 Big brother was of course watching but that's OK because we are watching them and are well aware of their lies about Wang Zhiwen and the Falun Gong. Just remember time is on the side of truth and that no lie can live forever. Wang was arrested in 1999 simply for being known as a Falun Gong coordinator in Beijing when the illegal and violent persecution was waged against the spiritual practice in July 1999. He was one of the first to be targeted in a show trial that was televised across the country as part of the regimes massive propaganda campaign to fuel the persecution. He served a 16-year sentence and was released in 2014. He has been under surveillance 24 hours a day and constant harassment. It's time to let him leave.

The show trial was a bizarre example of government lies and propaganda. The first absurd allegation is that Falun Gong is a cult. That is ridiculous. The CCP claims anyone that disagrees with them is a cult. The Falun Gong are not a cult any more than the Dali Lama is. The CCP hates the Dali Lama too but the rest of the world sees him a a peaceful spiritual leader.

The Falun Gong are peaceful Buddhists that believe in truthfulness, compassion and forbearance. Their crime is that they like to meditate. You can't get any more peaceful than that. During the televised mock trial the CCP made an absurd allegation claiming that the Falun Gong cut themselves. That is simply not true. They even went so far as to set up a fake self mutilation event at Tiananmen Square. Those people weren't even Falun Gong practitioners. It was the perpetuation of the televised mock trial fraud.

Wang Zhiwen is currently under house arst after serving a 16 year sentence. Earier this month he was prevented from leaving the country with his family. It's time to stop the lies and let him leave. He has suffered enough. Organ harvesting is unethical. Stop the greed and stop the lies.