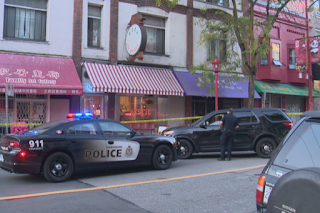 Global reported that one man was in the hospital and two people were arrested following a shooting in Vancouver Wednesday August 17th. I reported on it the day after it happened but now I have a source that claims the person shot was the leader of the BC Redd Alert who goes by the name Steele. I'm not sure if that means the UN are making a come back in the DTES but it shows another shooting that is tied to Hells Angels associates involved in the drug trade.

Posted by Dennis Watson at 3:38 PM