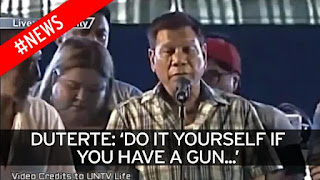 Rodrigo Duterte, the new Philippines President is certainly making the news with his new shoot to kill policy on all suspected drug dealers. This is a prime example of extremism where human rights are completely abandoned. The Philippines has a long history of corruption. Now we have a guy who gets elected on a tough on crime platform that completely loses touch with reality and becomes worse than the drug dealers he is trying to eliminate.

Shooting all drug dealers without a trial is a very slippery slope. What's to stop him from shooting any political rivals and accusing them of being a drug dealer? Just like how England removed basic rights from terrorists then with one wave of the pen classified anyone who participates in the occupy movement as a terrorist. It's a pretty convenient way to remove the right to legal representation and a fair trial from anyone who disagrees with a government policy.

CNN is reporting that The President of the Philippines has named over 150 government officials who he says are complicit in the country's drug trade. How convenient. BBC is reporting that Philippines President Rodrigo Duterte has accused dozens of current or former politicians, officials and judges of links with illegal drugs and told them to surrender to be investigated.

Aljazeera is reporting that Duterte was speaking from his constituency of Davao, where he served as mayor before winning the presidency. Earlier on Saturday, Duterte had vowed to keep his "shoot-to-kill" order "until the last day of my term, if I'm still alive by then". "I don't care about human rights, believe me," he said, according to official transcripts released by the presidential palace. About 800 people have been killed since Duterte won a landslide election in May, according to reports by the local press, which has been tracking reports of extra-judicial killings.

The Mirror in England is reporting that The former Davao mayor said that drug addicts could not be rehabilitated, adding: “If you are involved in drugs, I will kill you. “You son of a whore, I will really kill you.” Mr Duterte insisted his vigilante anti-crime campaign would be “a bloody war,” as he offered bounties for killing drug lords. “I will pay, for a drug lord: five million pesos (£15,000) if he is dead. If he is alive, only 4.999 million,” he laughed. He did not say how a private citizen could identify suspects. He just said do it yourself if you have a gun.

This raging lunatic is no better than any other bloodthirsty dictator in the history of the earth. What's to stop anyone from robbing someone and claiming they shot them because they thought they were a drug dealer? This lunatic is insane and evil. There is nothing good about him.

Philippines does have a problem with corruption. This is not the way to deal with it. You can't protect freedom by doing away with it. A few years ago I was corresponding with a new branch of the RA in Belfast. They were asking me about the Hells Angels since they started a new chapter there. I said they will kiss your ass and tell you one thing, then the next minute they will be pimping Ireland's fair daughters and selling crack on the street. He said we don't allow that here. Here in West Belfast we shoot drug dealers dead. I chuckled and said we aren't quite there yet here in Canada. However, going to this new extreme is nothing to joke about.

Locally we have a real problem with corruption too. Perhaps even on a larger scale. Some police, some politicians and some judges are clearly involved. Shooting them all without a trial may be tempting but it is clearly not the answer because that process can easily be abused.

Here in Vancouver and Surrey we see the opposite extreme. We see police officers that refuse to arrest known drug dealers despite the consistent complaints of local business and residents. Instead of arresting the drug dealers that sold a bad batch of crack cocaine laced with fenytly, Bill Fordy is letting the harm promotion drug dealer support group set up tents and injection sites to promote addition and boost drug sales. Vancouver and the Philippines are two opposite extremes.

Somewhere in between those two extremes we have the New York Model where law enforcement arrest the known drug dealers. Failing to do that makes us criminally culpable in their crimes. I can tell you right now who reloads the Surrey strip and there they are supplied from. Yet Bill Fordy and the Gang Task Force refuse to do anything about it. Instead of shooting that dancing monkey dead for aiding and abetting those crimes the RCMP keep giving him promotions simply because they are corrupt at the top. That is the truth we now face.

Posted by Dennis Watson at 9:48 AM