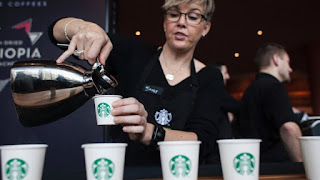 CBC is reporting that "Port Moody police say a 16-year-old girl died Sunday in a Port Moody Starbucks washroom where they also discovered drug paraphernalia and a small amount of drugs." Police haven't said what drugs were involved and whether or not it is tied to the recent surge in fentanyl fatalities but the bizarre response is very disturbing.

Once again extremists are using this tragedy to try and put a lethal injection site into every community under the sun. So does that mean we are going to open up lethal injection sites to minors? Just what are we really promoting here? Why are we rewarding drug dealers that sell tainted drugs? That is insane. It is indeed tragic a 16 year old girl died of a drug overdose. It could have been any of our daughters. No doubt the patrons at Starbucks are traumatized.

We cannot in good conscience endorse harm promotion without supporting treatment and prevention as well as enforcement of current laws with regards to charging drug dealers. Blindly endorsing the drug dealers the way we are is a crime. I have numerous people from different communities that consistently say they dont want a lethal injection site in their community. We need to start arresting the drug dealers. It is as simple as that. Failing to do that and we are part of the problem not part of the solution. Endorsing drug dealer support groups like VANDU is wrong. It's time to wake up and smell the coffee. An ounce of prevention is worth a pound of cure.

Update: CBC is reporting that "The mother of a Coquitlam, BC, teen who died of a suspected overdose in a Starbucks washroom says she tried to get help for her 16-year-old daughter who was struggling with addiction but the public waitlists were too long and she couldn't afford private clinics." Maybe spending tax dollars on rehab is more important than feeding Insite's slush fund.

Posted by Dennis Watson at 6:48 AM