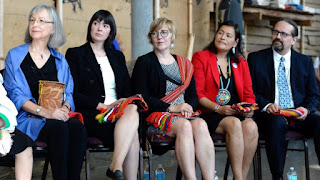 CBC is reporting that Five new commissioners have been chosen for a new Missing and Murdered Indigenous Women Inquiry and that B.C.'s 1st female First Nations judge will lead the national inquiry. Let's hope it's better than the last one and not more smoke and mirrors.

I'm not sure how this relates to the Dianne Rock story and the Pickton Farm since many of those murdered women weren't First Nations. Many were. I certainly hope non native women won't be excluded from this inquiry. I don't know if Janice Shore was First Nations but I do know the First Nation Elders held a vigil for her on the site in Whalley she was found brutally beaten into a coma.

We need to reexamine the Pickton Farm since Willy was convicted based on the fact that he was not the only participant nor was he the prime suspect, just a willing participant. Dianne Rock being gang raped on the Pickton farm clearly implicates more than one suspect. I wonder if this inquiry will tell us which off duty police officers attended parties at Piggy's Palace. It would be very interesting to hear how Jim Brown fits into that picture.