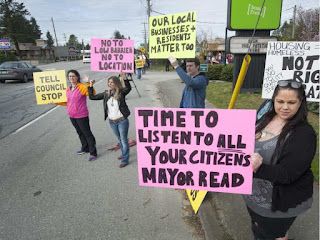 The Vancouver Sun is reporting that local residents in Maple Ridge held a protest about a proposed drug house the city plans on building beside a day care.The city wants to turn the Quality Inn into a homeless shelter. Normally that would be a great idea. However what they are planing is not a homeless shelter it's just another drug house like the Front Room and the Lookout in Surrey.

"Lyanne Alexander says if a proposed homeless shelter opens beside her Maple Ridge daycare, she’ll have to close. 'We have 45-plus families in our centre and 55-plus children,' said the co-owner of Meadow Ridge Centre for Childcare on at 21409 Lougheed Highway. 'We’d have to close. We’ve got feedback from families that if it goes through, they’ll go elsewhere. I don’t blame them. If I had children here, I’d do the same.' Alexander said the low-barrier centre would be built beside their facility in an empty lot that’s already frequented by homeless and drug-addicted people. 'We see a lot of homeless people there, drug users, condoms. If it was a built facility, it would be magnified hugely from what we’ve seen,' she said."